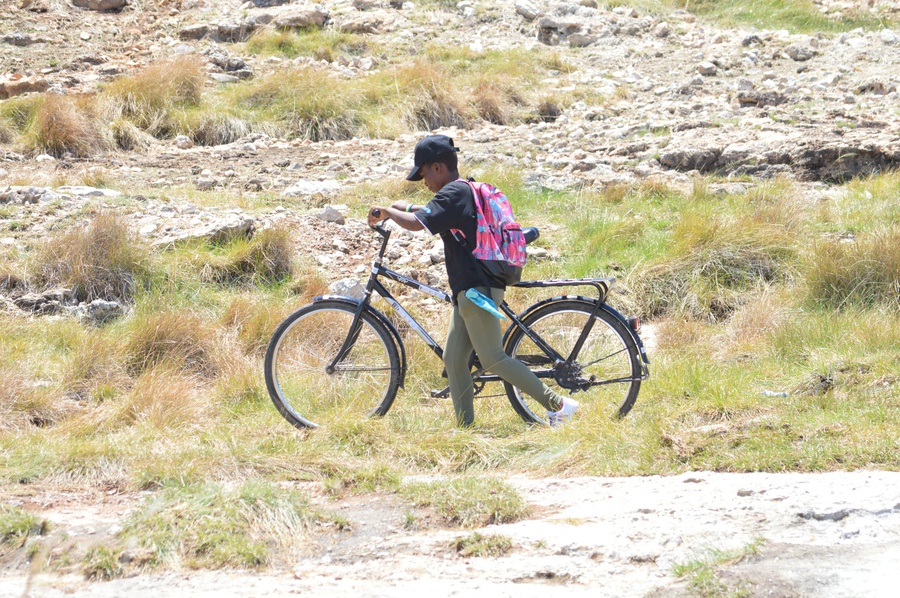 One senses great conviction and unmistakable empathy when listening to Farai 21, talk about her work as a Community Adolescent Treatment Supporter (CATS). She’s responsible for counselling and supporting HIV positive children and adolescents, in the picturesque Binga district in Matebeleland province.

Farai remembers living like a hermit when she tested positive for HIV and how since then she been transformed as a CATS, working closely with health facilities, families, and communities to respond to the unique needs of young people living with HIV. Her lived experiences have changed the way she approaches challenges of stigma and she is sharing her knowledge.

The sun is setting on a Thursday afternoon of a punishingly hot day in the quaint Binga district, famed for its hot springs, Zambezi River, the traditional Tonga natives and fishing culture, which make it a favourite for tourists. The district is a stone’s throw away from Zambia with whom it shares the mighty Zambezi River.

Farai speaks eloquently about living with HIV and her contribution to her community:

I have been in the CATS programme since 2015. I tested positive in 2012 but my father did not disclose this to me. I was too young to understand what was going on around me. I was taking tablets I did not know. I was in the dark.

"A nurse at Binga Hospital changed this one morning when she disclosed what was happening to me. It was a shock because there was a lot of stigma around HIV in Binga. This was fortunately the beginning of the work I now do and love. It has been a journey of self-discovery as well.”

Farai, who has three siblings who attend primary school in Binga, says being selected to train as a CATS came as an unpleasant surprise because her first thought was that she was going to be the only trainee living with HIV, however, this was not the case: all trainees were adolescents and young people living with HIV.  I also thought that my work was going to be limited to interaction with those living with HIV, but I now have an important role in my community linking people with services they need.

Africaid and the Zvandiri Programme

Africaid is a local NGO and implementing partner of UNICEF Zimbabwe. The Zvandiri programme developed a peer support system to enhance achievement of HIV, health and protection outcomes for children living with HIV.  Even the name of the programme - Zvandiri - which means ‘As I am’ in Shona language - is an appeal to society to stop stigmatizing HIV by accepting people living with HIV, as they are.  It aims to reach children, adolescents and young people aged between 6 and 24 years.

Community Adolescent Treatment Supporters, known as CATS, are key actors to implement Zvandiri. These adolescents aged 18 -24 are identified among young people living with HIV and are trained to provide support to their peers in the community, working closely with their local health clinic and the community child protection system.

As part of a ‘cash and care’ model, every two months vulnerable families receive an unconditional transfer of US$20-50 (depending on household size) under a UNICEF -supported Harmonised Social Cash Transfer (HSCT) programme. Through the pay points of the HSCT, the CATS provide ‘care’, disseminating information about their services as they interact mostly with elderly beneficiaries who are raising orphaned children and have limited knowledge about HIV and the services available for those living with HIV. These interactions assist families to support children in their care to access HIV testing and enrol those who test positive to access various Zvandiri activities including support groups, information on sexual and reproductive health. The programme has helped to increase the uptake of HIV services, treatment adherence, and referrals to child welfare and protection services.

The Harmonised Social Cash Transfer programme (HSCT) and the National Case Management programme were launched in 2012 with support from UNICEF and the Governments of the UK, Sweden and Switzerland, with complementary funding from the Government of the Netherlands strengthening care for children and adolescents living with HIV, and from the Government of Japan supporting services for the most vulnerable children in El Nino-affected communities.

Farai pauses briefly to compose herself before speaking emotionally about some of the heartrending situations that she encountered whilst working with other children living with HIV.

“I work with 55 clients in Binga [and] one of them stands out. When I visited a particular client, who was eight at the time, there was denial from family members he stayed with. He was going to lose his life because, despite having been tested, nobody was following up on the clinic visits and he had defaulted. He was not going to school and [the situation] was looking hopeless. He is now back to school and looking healthier. The family is now accommodating and supportive,” said Farai. She recalls how isolated she also felt when she was first diagnosed: how difficult it was for friends and the immediate community to accept that she was living with HIV. It affected her learning forcing her to defer school for a year.

“Parents with children in Binga urban still experience stigma,“ said Farai. “The parents can make access to the children difficult because of fear of stigmatization.  Parents or guardians are the hardest to convince, because they are unsettled by neighbours making the family’s situation a community story. But because I have the counselling skills I have managed to change minds. Children and adolescents feel comfortable speaking to me and can relate, because we have the same interest and are young enough to understand each other.”

There are 20 CATS in Binga district, but the vast area means Farai must sometimes travel more than 20 km to visit some families. With UNICEF support, Zvandiri/Africaid provided 20 bicycles and 20 mobile phones to CATS to strengthen their work in the district. “I used to walk for 10 km to attend to a client and then use public transport for distances of more than 10 km,” said Farai. “That big challenge was solved now that we have bicycles.

Speaking to the nation: delivering hope

Farai appreciates that she has become a voice of hope for many. Her work has not gone unnoticed. “There is a Zvandiri Radio Programme on ZIFM, a station based in Harare. I managed to travel and speak on issues of HIV. At the moment, I do a weekly recording that I send to Harare for broadcast. The feedback has been humbling and I feel like I am making an impact.

“I dream of becoming a community leader in the field of HIV. This is the kind of work I would want to do. The sky is the limit. There is gratification in this support work because humanity needs it,” shares Farai.

Mugove Gonese is Farai’s Zvandiri mentor in Binga. She says, “Most of the important things in the world have been accomplished by people who have kept on trying when there seemed to be no hope at all. That is my favourite quote by Dale Carnegie. We keep hope alive.”

She added: “The CATS have helped not only to those who are living with HIV but have also provided support to other children in families they are working with by referring them to Africaid or Department of Social Welfare, children without birth certificates, children who are not going to school and children who have abused.  This has also reduced the stigma against those affected by HIV.”