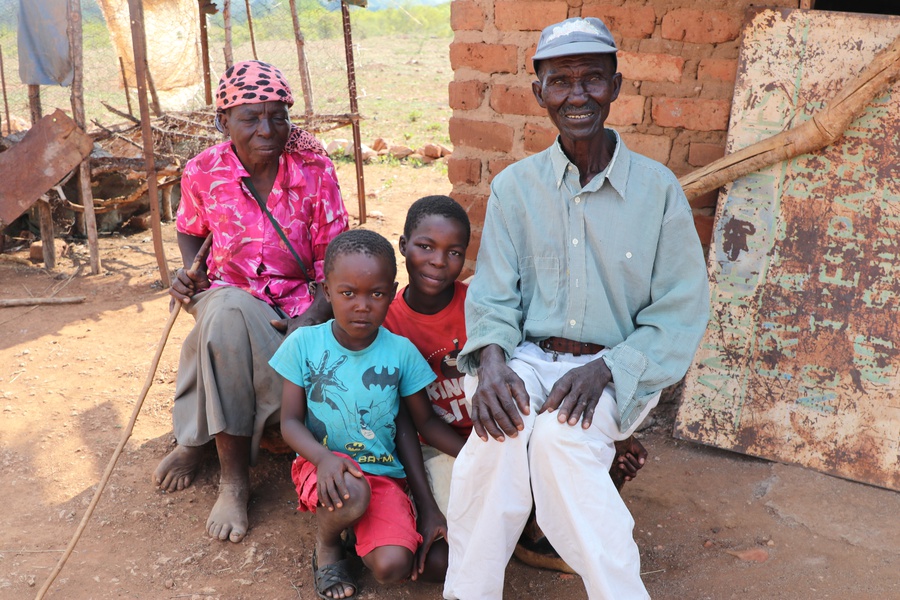 Natasha Moyo (11) leans against a tree and recounts the time when she thought her beloved grandfather, Albert Chengeta, had died. Diagnosed with cholera he was in hospital when a rumour circulated among her relatives that he had passed away. “When I heard that [my grandfather] was taken to [local referral hospital] Mnene, I never had a problem.  I only started crying when people who had visited him came back saying he had died. I was worried a lot because he pays for my school fees and takes care of me and my little siblings. He tells us fairy tales every evening too.”

Natasha was relieved when she subsequently learned that her grandfather was in recovery. It also made her determined to learn more about cholera and how to prevent it.

Natasha lives with her grandparents and her two siblings Nelson (6) and Tadiwa (3) in Chomubhobho Village 6, a rural settlement established in 2000. She has never lived with her parents. “My mother stays in Fulabusi [in Matabeleland South province]. She sometimes comes home on Christmas holidays. So I have always been with my grandmother and grandfather. I have heard that my dad is in Bulawayo but I don’t know him,” said Natasha.

In Natasha’s village, only 22 per cent of households have toilets and handwashing facilities. Open defecation is widely practiced. According to Provincial Health Promotion Officer, Rumbidzai Chimukangara, “The community was not really aware of cholera because they have not had cholera outbreak for quite a long time.”

A collective response to the cholera emergency

Following the outbreak in Mberengwa East district in December 2018 which recorded 26 cholera cases in a space of the month, the Government of Zimbabwe and other development partners, with UNICEF support and funding from the multi-donor Central Emergency Response Fund (CERF), spearheaded the distribution of multi-media materials promoting good sanitation and hygiene practices for cholera prevention, treatment and control in Chomubhobho rural community.

As part of a collective response to the crisis, water treatment tabs were distributed, dysfunctional boreholes were rehabilitated, and District Health promotion officials worked with the community radio station, YA FM, to broadcast cholera prevention messages. The Village Head added supervision of pit latrine construction to the responsibilities of the Village Committee and - in the absence of sufficient Village Health Workers - volunteers were trained to educate the community on health-related issues.

These efforts transformed hygiene practices in the village. “With health education, the community now appreciates and have changed some of the practices that were predisposing them [to cholera],” said Rumbidzai Chimukangara.  “Because we now have volunteers, this will help to increase awareness in the community.”

Equipped with health promotion information, Natasha has become a champion for safe hygiene in her family. “Before I leave for school, I clean up and refill water buckets every day. [The Community Volunteer] taught us to keep water buckets clean and to treat drinking water before we drink it,” said Natasha.

Natasha’s grandfather is proud of her conscientiousness. “Natasha makes sure the water is clean by adding [aqua tabs] to the water without anyone supervising her, probably because she realised I almost died of cholera,” said Albert. “Of late, she has been telling us what they have been taught at school on making drinking water safe, so we allow her to put it into practice.”

“Last term I was number three in class, but sometimes I get position two as well,” said Natasha. “When I finish school, I want to be a doctor so that I can help people in our community.”