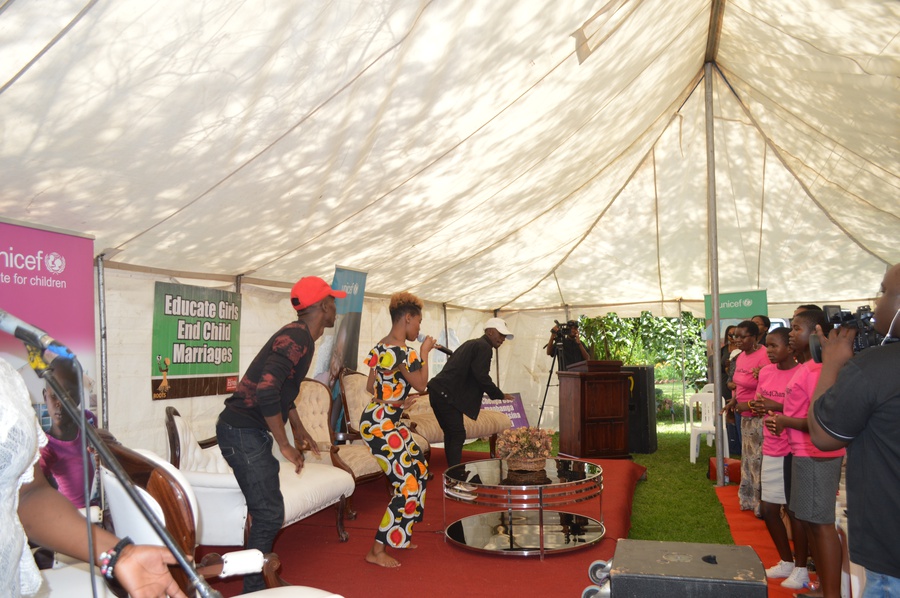 Running under the theme ‘EmPOWER girls: Emergency response and resilience planning,’ the commemorations for international day of the girl child were marked by music and dance alongside deliberations aimed at ending child marriages and, empowering the Girl Child to take a stand against all forms of abuse. UNICEF Zimbabwe hosted the event in partnership with ROOTS, and participation from organizations including SAFAIDS, Shamwari Yemwanasikana, DREAMS, Katswe Sisterhood.

Nyaradzayi Gumbonzvanda, the African Union Goodwill Ambassador on Ending Child Marriage made a call to shun the single narrative approach, where the Girl child is always depicted as a vulnerable and clueless being. “In the entire Development fraternity if they make mention of the girl child it is always in the single narrative where the girl is referred to as poor, vulnerable and always waiting for people to help.”

UNICEF Deputy Representative, Dr Jane Muita highlighted the importance of ensuring that the girl child has access to services and a safe environment, especially during times of crises or emergency. “In the case of such natural disasters the girl child faces larger risks, violations and vulnerabilities when their lives are disrupted by climate change, disaster, or conflict,’ she said. “At such times, they are more likely to find it difficult to access life-saving resources, information and networks.”

A panel discussion featuring prominent figures such as Loveness Mudzuru the former child bride who successfully challenged the Constitutional Court to ban child marriage shared their trajectory to empowerment and advised young girls to take a leaf from their experiences. Cultivate Africa founder Emeldah Vhiriri urged young girls take an aggressive approach to life so that they rise above society imposed barriers. “If they do not give you a seat on the round table, bring a folding chair,” said Vhiriri. “Female is nothing but biology!” she added denouncing sex as a barrier to the success of the Girl Child.

The commemorations day saw girls being urged to believe in the inner person in order to propel themselves to the top. “Be who you are,” said McDonald Gurura Hope Today founder and radio and television personality. ”Do not conform to unrealistic standard of beauty that is sometimes pushed by the media.” He also reiterated the need for girls to guard against living a life people around them say that they are.

Other issues grappled with were the challenges girls face in times of droughts where parents leave homes in search of greener pastures resulting in compromised performances in schools and subsequent failure to enjoy same rights as the boy child.